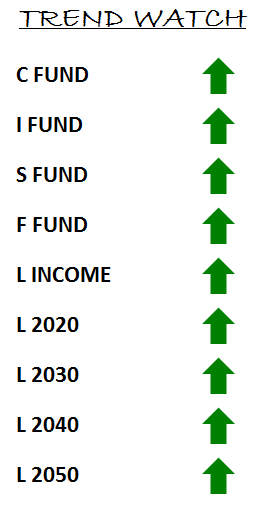 This is your TSP Watchdog UPDATE for the week ended June 2, 2017.

In a holiday shortened week, stocks advanced…again – with all the major indexes finishing the week at all-time highs: the S&P was UP 0.96%; the Dow gained 0.60%; the NASDAQ jumped 1.54%.  For the S&P and the NASDAQ, the new highs were nothing new, as there have been several new all-time highs for both indexes in recent weeks.  But, for the Dow, this was the first new high since early March.

These gains came in the face of ever more negative press from Washington.  Investors continue to shrug off dramatic headlines – this week including tidbits from the President’s European / Mideast trip, continuing outrage about implied collusion between Team Trump and Moscow and, of course, the withdrawal from the Paris climate change agreement.  For now, the markets are focusing on the growing economy, improving employment picture and progress towards the President’s pro-business agenda.  Ultimately, they will either prove to be correct or they will repeat an oft-repeated market tendency to underappreciate political risk.  In other words, don’t get too excited about the market ignoring the attacks on the President; investors have a poor record when it comes to factoring political events into their pricing models.

This week looks to be slow – at least with respect to economic news.  Call it a calm before the storm – as next week the Federal Reserve meets again to consider the plight of enlightened people everywhere – or at least to discuss raising interest rates again.  While the most recent employment figures were not quite as good as expected, and inflation is slightly below the Fed’s target rate of 2% – most “experts” believe that another rate hike is in the cards during June.  Stay tuned.

As the weeks pass and all the TSP funds remain on positive trends – and we remain fully invested as a result – we are fielding some questions about why people need to keep TSP Watchdog (since the market is doing so well).

The simple answer to this question is that just because the markets are doing well today does not mean they will always do well.  In fact, some market observers believe that every day that passes without negative market activity brings us one day closer to an inevitable market decline.

Another view of our role in managing your TSP account is that of an insurance policy.  Think about insurance you buy – you pay your premium – then you hope you never have need for the insurance you just paid for.  Similarly, we hope you never need TSP Watchdog’s primary objective – to protect you from major market downturns.  But, even if the market continues to rise, TSP Watchdog earns its keep by providing rationale for staying invested when other input might scare you out of the market – thus enabling you to continue participating in the market’s gains.

The bottom line is that TSP Watchdog cannot “guarantee” that you do not suffer financial loss (like insurance is intended to do), but our purpose is to minimize your financial pain and maximize your financial gain.  At some point in the future – be that a week from now, a month, a year, or more – the markets will decline significantly (they always do, eventually).  Our job is to help you avoid (or minimize your exposure to) that inevitable decline.  In the meantime, we will help you remain invested so that you capture as much of the market’s upside as possible.

If you have questions about what TSP Watchdog is doing for you, send them along.  We are happy to justify our existence (aka, explain the value we bring even when the market just keeps going higher week after week, month after month).

Enjoy the long hours of daylight – as we approach the longest day of the year!